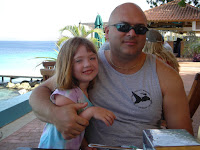 Captain Don's Habitat in Bonaire is currently offering 1 free night, 6 days of 1-tank boat dives, UNLIMITED shore diving, welcome drinks, 'Meet the Captain' party (yes, the REAL Captain Don himself!), and a fabulously hospitable staff for only $702 per person!  The water is warm, the underwater life is abundant, and you can see my BareDiver t-shirt hanging above the bar! 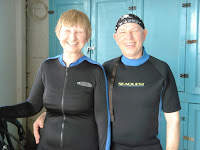 Want to take your children or your grandchildren?  Captain Don's is currently offering FREE lodging and diving for children under 16! Non-diving children will get a FREE Introductory Scuba Course!  Some restrictions apply.

For more information on either one of these GREAT deals contact Christy:  Christy@BareDiver.com
Posted by BareDiver Travel & Scuba at 10:23 AM No comments:

I am excitedly planning an upcoming dive trip to the Underwater Jules Hotel in Key Largo, FL.  If you have done this, tell me about your experience!  If you've never heard of Jule's Undersea Lounge, check out this amazing adventure!  Dive down into the hotel at the bottom of the ocean, have a window to the underwater world while you hang out overnight!  http://www.jul.com/  I'll blog about it when I get back!
Posted by BareDiver Travel & Scuba at 12:16 PM No comments: 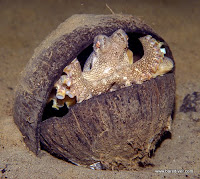 Add the octopus to the growing list of animals seemingly capable of using tools!  During several dives in Indonesia, Australian biologists documented the remarkable efforts of the local veined octopus to procure empty coconut shells for refuge. The animal first digs up the shell, which as fallen to the sea floor, and squirts it clean of mud. It then straddles the shell, empty-side up, stiffens its tentacles, and gallops off across the sea bottom with the shell - as far as 65 feet - like an eight legged horse! "I almost drowned laughing when I saw this the first time," researcher Julian Finn tells BBCnews.com (Health and Science magazine 1/15/10)
Posted by BareDiver Travel & Scuba at 5:41 PM No comments:

Email ThisBlogThis!Share to TwitterShare to FacebookShare to Pinterest
Labels: Critters

Book your stay today at the Beautiful Rio Mar Beach Resort (a Wyndham Grand Resort) in Puerto Rico and get 1/2 of your nights FREE! I'll also throw in a $100 Food and Beverage Credit!  Puerto Rico has beautiful diving, great cave diving, and much more!  Check out the Rio Mar at 222.wyndhamriormar.com (stay for 4 nights and pay for only 2 or stay for 8 nights and pay for only 4!  Hurry, offer good for a limited time only!)
Posted by BareDiver Travel & Scuba at 5:24 PM No comments: